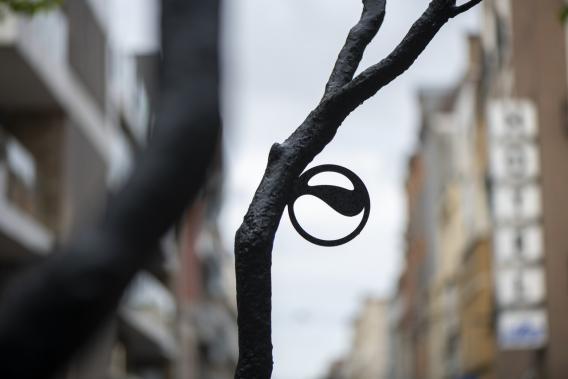 MIR: For the Beaufort triennial you have made a monumental sculpture which, when walking along the beach in Ostend, you can see from afar. The work is installed in such a way that the sea submerges a part of it daily.

RB: When Heidi Ballet invited me to propose a piece for Beaufort, I was excited to let the ocean become a tool for time and vice-versa.

“Pillage of the Sea” is a yardstick, in the shape of a tower of fabric casted bags, which gets activated and visible through the ocean’s tides. It is sometimes more visible than other times. At some point it will be completely invisible, when all fabric casted bags which represent a city are submerged by the water.

World cities like Jakarta, Chennai, Bangkok, Rio de Janeiro, and Miami are visualized by a sandbag whose size corresponds with the current population size of that city.

The sculptural form is inspired by the piled-up stones in landscapes by hikers and wish-senders to the future. I encountered many of them when working on a film in Peru.

MIR: A few days ago, I read an article by Jade Lindgaard, a journalist specializing in environmental issues, about the hypothesis that we are heading towards a brutal global warming that will be difficult to stop. This hypothesis would imply, on a scientific, political, and citizen level, a series of urgent measures.

How does the piece respond to this impending climate catastrophe?

But the piece is not only meant to function as a reminder; it is sending a wish and an offering out to nature. Again, in Peru, I learned from a Quechuan community how important that is.

During my film shoot and research for “Aggregate States of Matters” I worked with communities that are affected by glacier melting and its geological time becoming present today. In a cautious, yet scrutinized exploration, the film illustrates blurring and melting boundaries between human and non-human actors. While the indigenous population profits from the benefits and wealth of farming, which rapidly increased due to changing environmental conditions, they concurrently face fast-moving challenges in their spiritual and cultural lives. Deriving from an extensive dialogue with the local people, i tried to draw a critical picture of a world where progress and growth have stopped making sense, without reducing the complexity of the current situation in our era.

MIR: It's not the first time that the ocean is present in your work. There are some earlier works where the ocean also plays an important role, which seems to point at a subject of interest that regularly returns.

Rosa Barba: Yes indeed, the Ocean is a theme in my research I always like to return to. In 2007 it was the subject surrounding a drifting island called Gotska Sandön. "Outwardly from Earth's Center" is built on the narrative of a fictitious society on an unstable piece of land in danger of disappearing. This situation requires the population's collective initiative to secure everyone’s survival and the society to remain. In my most recent film “Inside the Outset- Evoking a Space of passage” the film starts with underwater shots of the Mazotos shipwreck in front of the coastline of Cyprus. “Time” in fact another recurring protagonist and tool in my work that I use to examine and try to understand the world around us with, and both come together in this new work Pillage of the Sea.

MIR: “Pillage of the Sea” is like a kind of witness silently observing the horizon, or even the future.